The Scarlet Facility houses two dedicated computer clusters -- a stack of desktop machines devoted to Monte Carlo modeling the radiation response of detectors that will be used in the Scarlet Laser Facility and a significantly more powerful machine called Ramses-II. The latter was acquired in mid-2011 and features six nodes with 48 cores and 130 GB of RAM *per node*. With so much computing power on a single motherboard, many simulations that previously were run over many nodes at the Ohio Supercomputer Center (OSC) can now be run in-house on a single Ramses node. These nodes have recenlty been connected together with infiniband communications to improve the speed of simulations running across multiple nodes. Also, 10 TB of RAID storage has been added as a high-speed repository for holding and accessing simulation data. 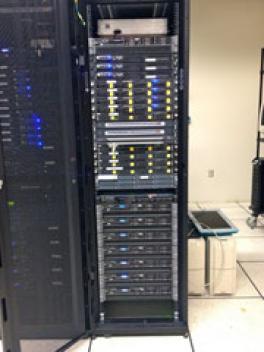 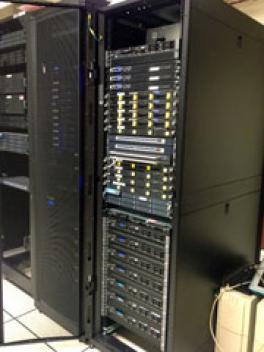 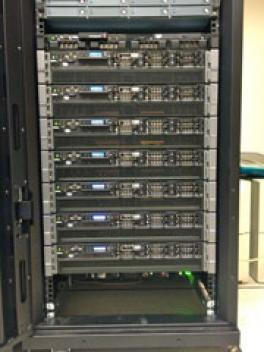 The task of accurately simulating the microscopic details and rapid timescales of laser-plasma interactions requires considerable computational resources. Each year the HEDP group utilizes over 1,000,000 CPU-hours of computer time on a variety of machines. Our longtime ally has been the OSC, located on west campus. In 2011 we were awarded a Discovery Grant of 2 million CPU-hours on "Glenn", OSC's flagship machine at the time, named in honor of Ohio Senator/Astronaut John Glenn. Recently OSC has de-commissioned a large section of Glenn and replaced these nodes with newer ones, with significantly more RAM -- totaling more than 33 TB -- larger storage and a faster interconnect. This new cluster is named after Ohio Sharpshooter, Annie Oakley. Our group was among the first to exercise the new machine when it came online in February 2012.  Douglass Schumacher has had continuous support from the OSC for four years, currently at 4 Mcpu-hours/year.

In collaboration with research scientists at Lawrence Livermore National Laboratory (LLNL), for certain projects we use the Sierra supercomputer.  Located at LLNL, and running at over 100 Tflop/s at peak, Sierra is one of the most powerful supercomputers in the United States. In late 2010 our group, in collaboration with senior LLNL scientist Scott Wilks, was awarded a "Tier One" allocation from the Unclassified Institutional Grand Challenge to use up to 200,000 CPU-hours per week on Sierra to investigate "Positron and Electron Generation by an Intense Laser Illuminating a Solid Target".