No matter whether we are measuring the properties of extremely hot, dense plasma or generating beams of x-rays or ions, the story begins with an intense laser-matter interaction. Matter will ionize at a laser intensity of 1013 W/cm2. At intensities in excess of 1021 W/cm2, solid matter becomes plasma and electrons are accelerated to relativistic energies leading to the generation of enormous currents and fields that heat the plasma.

Since no analytical theory can encompass these effects, numerical modeling is crucial. Moreover, the experimental diagnostics we employ provide only indirect measures of the quantities we require; for example, because of the perturbing effects of the enormous fields, the measured spatial and spectral distribution of electrons measured outside the irradiated matter does not accurately describe the initial distributions of electrons that were accelerated by the laser. These quantities are determined by comparison to numerical modeling. The OSU HEDP modeling group plays the key role in the design and analysis of laser-plasma experiments performed in our own laboratory and by the several large research collaborations to which we belong. 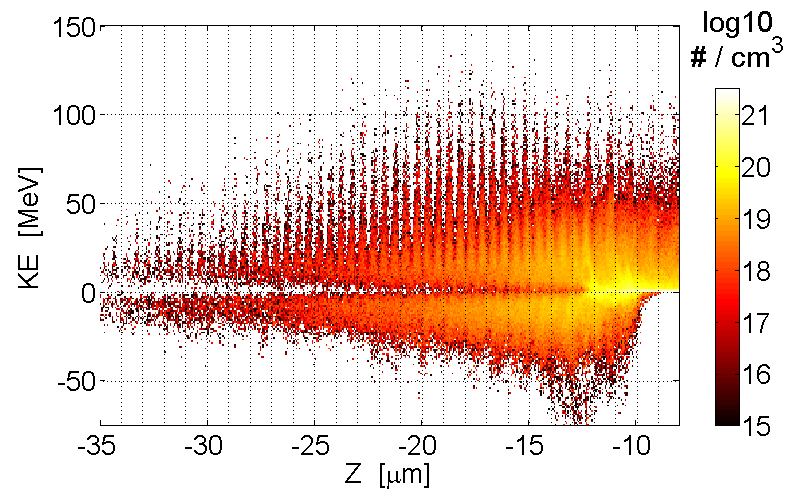 Our primary computation technique is particle-in-cell (PIC) code calculation. PIC codes, which are grid based, use of a small number (typically ~108) of “macro-particles” to represent the much larger number of real particles (~1020) present in an experiment. The interaction between the electrons and ions, and the electric and magnetic fields, is evaluated at a finite number of discrete locations on the grid and then interpolated, permitting rapid integration with respect to time. As with all numerical methods, this approach necessarily throws away some of the real physical behavior. The “art” in the science of computer modeling of complex systems lies in the ability to insert the missing physics back into the computer model. Once we have what we think is a successful model, we analyze experimental results by modeling the experiment, and compare in detail the predictions of the model with the experimental results. To improve our model, we concentrate our attention on the differences that exist between the predictions of the model and those quantities that were measured in the experiment. We determine what other physical interactions are missing and find numerical methods to include them in the model. Using this iterative approach, we develop a deeper understanding of the important physical processes that shape the extreme environments that we create with the laser.