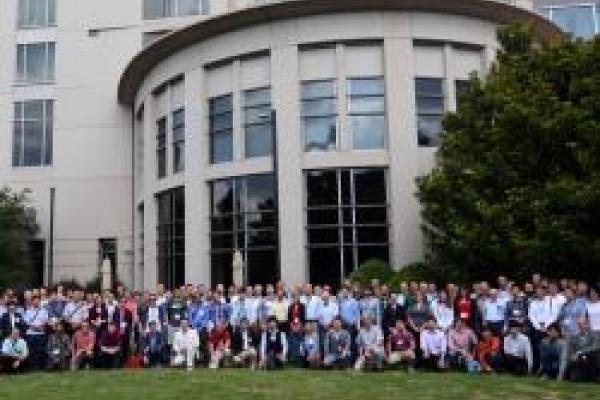 Scott Feister presents a paper at the 20th Topical Conference on High-Temperature Plasma Diagnostics (HTPD) 2014.  All conference proceedings are published in the peer reviewed journal Review of Scientific Instruments.

A Novel Femtosecond-Gated, High-Resolution, Frequency-Shifted Shearing Interferometry Technique for Probing Pre-Plasma Expansion in Ultra-Intense Laser Experiments
Ultra-intense laser-matter interaction experiments (>1018 W/cm2) with dense targets are highly sensitive to the effect of laser “noise” (in the form of pre-pulses) preceding the main ultra-intense pulse. These system-dependent pre-pulses in the nanosecond and/or picosecond regimes are often intense enough to modify the target significantly by ionizing and forming a plasma layer in front of the target before the arrival of the main pulse. Time resolved interferometry offers a robust way to characterize the expanding plasma during this period. We have developed a novel pump-probe interferometry system for an ultra-intense laser experiment that uses two short-pulse amplifiers synchronized by one ultra-fast seed oscillator to achieve 30-femtosecond time resolution over hundreds of nanoseconds, using a variable delay line and other techniques. The first of these amplifiers acts as the pump and delivers maximal energy to the interaction region. The second amplifier is frequency shifted and then frequency doubled to generate the femtosecond probe pulse. After passing through the laser-target interaction region, the probe pulse is split and recombined in a laterally sheared Michelson interferometer. Importantly, the frequency shift in the probe allows strong plasma self-emission at the second harmonic of the pump to be filtered out, allowing plasma expansion near the critical surface and elsewhere to be clearly visible in the interferograms. To aid in the reconstruction of phase dependent imagery from fringe shifts, three separate 120° phase-shifted (temporally sheared) interferograms are acquired for each probe delay. Three-phase reconstructions of the electron densities are then inferred by Abel inversion. This interferometric system delivers precise measurements of pre-plasma expansion that can identify the condition of the target at the moment that the ultra-intense pulse arrives. Such measurements are indispensable for correlating laser pre-pulse measurements with instantaneous plasma profiles and for enabling realistic Particle-in-Cell simulations of the ultra-intense laser-matter interaction.
This research was sponsored by the Quantum and Non-Equilibrium Processes Department of the Air Force Office of Scientific Research, under the management of Dr. Enrique Parra, Program Manager.